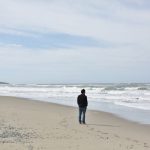 Brooding over the present lonely days