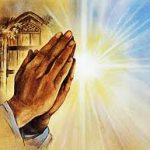 There are number of occasions, in my life to seek His will, and I learned to do it by reading His Word. That is the only way of finding His will. There are no short cut methods to find His will. “We are free to do what we like, Yet we do what He likes” is the freedom God has given to us. Because He shed His blood and bought us to be His sons/daughters and His friends. He called us His friends, not slaves.  This must be the only reason to find His will in our lives and seek His glory.

I often  read the Holy Scriptures to learn ‘how the great servants of God prayed’. David’s psalms taught me how to pray a prayer that is pleasing to God.  They often reminded the Lord about the promises He gave them in the past, they take those promises again and again to pray and to get assurance from the Lord for the problems they face in their present lives. They take time to sit in a place, before the Lord.  ===If we read the prayer of David, in 2 Sam 7:18-29–

“Then  King David went in and sat before the Lord, and he said,

( 1.) You have spoken about the future of the house of your servant.  ( David was telling the Lord that He already gave a promise about his future life of his and asking Him to fulfill it)

(2). for the sake of your Word, and according to your will ( David was praying according to the Word of God, not according his  likes, his words in his prayer were from the Word of God; and it was according His will, this is most important in  any body’s prayer, we cannot impose our wishes our desires on Him, “Our Father in Heaven Hallowed by Thy name, Thy will be done on earth as it is in Heaven”  this model prayer was taught by our Lord Jesus Christ, How can we deviate from such prayer and ask God every thing we wish to have?

3). and keep forever your promise, do as you promised v.25 ( What beautiful way of asking God, asking God to keep His promises forever, and telling Him He could keep His promises because He already promised to him .To pray like this one must be having a practice of unceasing prayerful life, having the experience of claiming His promises

(4). You have revealed this …  You said you will build a house for you.v 27 ( David was very clear about his prayer, for what he was praying, its not just something he utter whatever that comes to his mind by his lips, He was clear in his mind for what he had to pray, and he was not mincing his words in the presence of God, he was simply there with  a prayer with which he was well prepared,

( 5.)You have promised these good  things,v.28  ( He knew that God’s plan is the best plan for him, and His answers were  good and safe. A man who  dwell under His mighty wings knew how safe and good  the things he gain in life. Because the Giver is none but God Himself, they were not gained by his own strength and intelligence )

(6). For you YOU Sovereign Lord, have spoken….v.29(that  Again David telling God, that he was there to pray only those things which He spoke about–what an intimate relationship, what a beautiful face to face talk , what a indisputable close fellowship !!)

It was God’s Great Promise—-The Lord’s promise to establish “David’s throne forever” suggested that Israel would never lack the leadership they needed. This promise was one of the series of Covenants between God and his people- with Abraham (Genesis 12) with Moses at Sinai (Exodus 20) and now with David. The New Testament sees this promise being fulfilled in Jesus, The Son of David, and King of kings forever and ever.reigns the world. (Luke 1:32–33) David was reminding God about His promises, he was begging God to fulfill those promises in his life. —

My eyes are welled up with tears, to remember the faithfulness of God.   Yes, when God says, YES, it is YES all ways,( for all God’s promises are fulfilled in Christ with Resounding YES, and in Christ, and so through him the AMEN( which means Yes)is spoken by us to the glory of God.(“2 Cor 1:20)  How many times you claim that promise, when and how you claim that promise depends upon your need, your prayer your relationship with God, It is up to you !  When we seek the assistance of Holy Spirit in our prayer, He will pray on our behalf, just according to His will and His word.  We will know that we have prayed according to His will and that He would answer certainly. Also we will know how God would fulfill His promises again and again when we claim  those promises again in the crux of our needs.

I set apart certain days for fasting and prayer. Fasting for me ,means setting time and days to dwell my spirit only on that particular query to seek the answer from God. Whether I ate or not was not the question, but though its mattered sometimes. For me fasting prayer means, not to hover over mundane things, but to constrain myself from general things and concentrate on the predicament of doubt, to be clarified by His  Word and   keeping the whole time in the presence of God in my spirit, as the poor widow who persistently asking for justice from a unjustful Judge. In Luke 18:1-8

Then Jesus told his disciples a parable to show them that they should always pray and not give up. He siad ” In a certain town there was a judge who neither feared God nor cared what people thought. And there was a widow in that town who kept coming to him with the plea, ‘Grant me justice against my adversary’

For some time he refused. But finally he said to himself,’ Even though I don’t fear God or care what people think, yet because this widow keeps bothering me, I will see that she gets justice, so that she won’t eventually come and attack me!”

And the Lord said, ” Listen to what the unjust judge says. And will not God bring about justice for hs chosen ones, who cry out to him day and night? Will He keep putting them off? I tell you, He will see that they get justice, and quickly. However , when the Son of Man comes, will He find faith on the earth?

That widow is my hope, my model, my example to follow in my prayer.

When you donot know how to pray